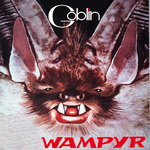 On the occasion of the italian release of the movie "Wampyr" (Martin) by George A. Romero, some already released tracks by Goblin were included into the italian version of the soundtrack. For the final part of the movie, the band composed one original track, called Wampir and included by Cinevox in the compilation Goblin Hell (cdmdf626). The tracks from the italian soundtrack of Wampyr are now collected into a compilation which is distributed in main online stores.